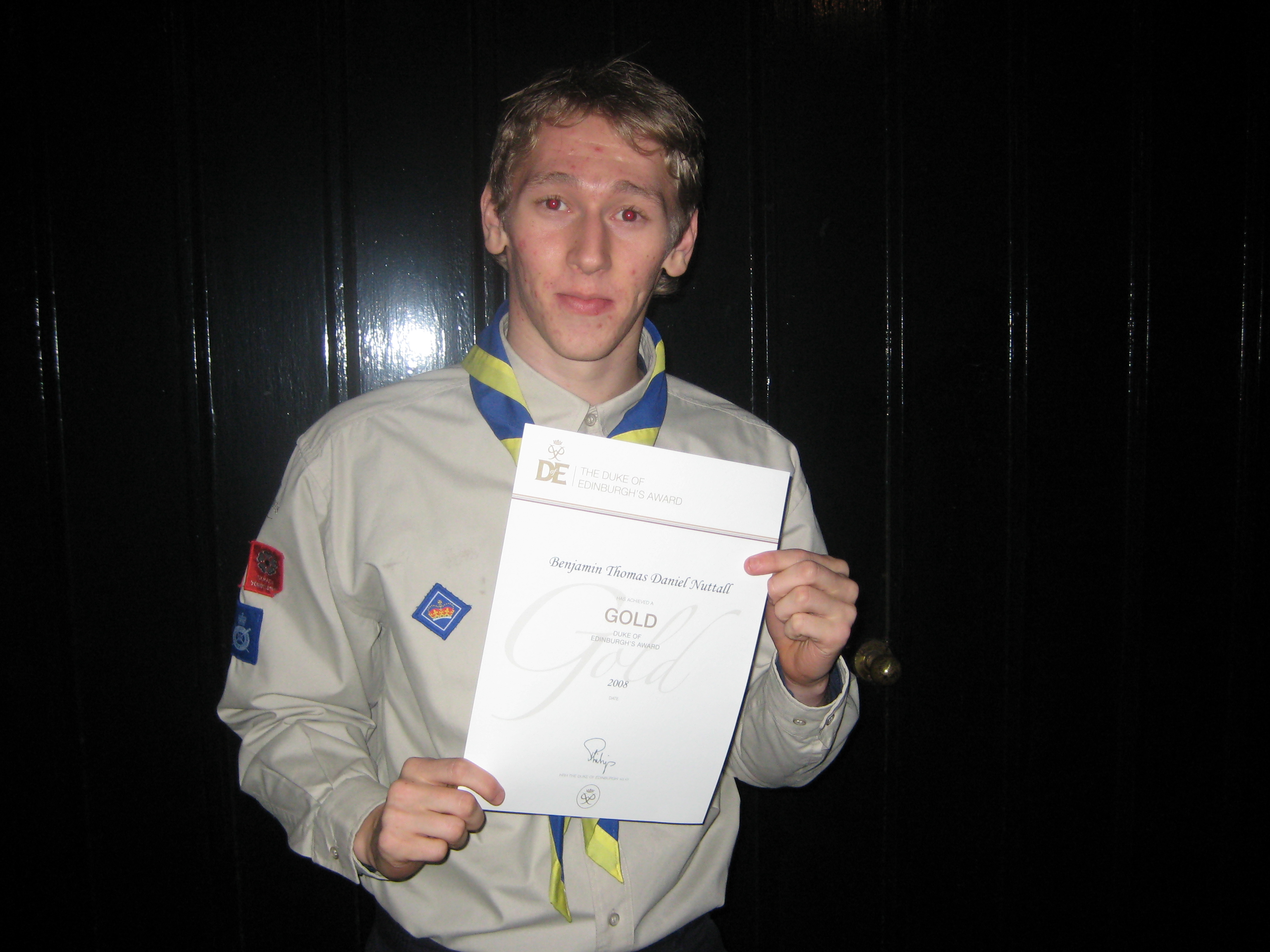 Being part of the most active Scout Unit in South Yorkshire, I was strongly encouraged to participate in the Duke of Edinburgh’s Award Scheme and given every opportunity to complete each section of it, with a decent amount of effort. I worked through the Bronze in my first year when I was 14, went on to the Silver which took me about 18 months, then steadily completed each part of the Gold over the course of about 2½ years while doing my GCSEs and A-levels, finishing the award in September 2007.

For each award, the participant has to complete each of four sections (and a fifth* for the Gold);

These things take a long time to process so despite the fact my forms were submitted in September 2007, it took till November 2008 for me to get my certificate. I also achieved the Queen’s Scout Award (which requires the completion of the D of E Gold amongst other accomplishments) at the same time and finally received my certificate from the Chief Scout Peter Duncan last month (see this post).

The Bronze & Silver certificates are merely posted out but the Gold ones are presented at a special ceremony with Prince Philip in presence. I had an invitation (the poshest invitation you’ve ever seen) to go to St. James’ Palace in London to be presented with my certificate, which I attended on Wednesday. I caught the train back to Sheffield on Tuesday night after my lectures, got a coach down to London with my Mum and we made our way to the palace where I saw my friend Annie in the queue to get in; I met Annie while doing my D of E, coincidentally, on my Gold Residential Project where I helped out (as did she) on a kids’ Summer Camp in Huddersfield. I then also bumped into my friend Miles, who is in the same Scout Unit as me; I had no idea he was going, as we’re at different universities and haven’t seen each other since Summer. We were seated together as we were grouped by region (Yorkshire & Humberside II) and we sat chatting about kayaking while waiting for things to begin.

We were given a speech from the guy in charge of the day, who told us all about St. James’ Palace and the room we were in, the Portrait Gallery, which contained dozens of portraits of monarchs. He also gave us a brief history of the palace, telling us facts like King Charles spent his last night in the palace before being beheaded, most of the things he said I’d found out on Wikipedia on my phone on the coach on the way there (maybe that’s what he did to prepare too). He then passed on to Steve Backshall, a TV presenter who makes shows about explorations and expeditions such as Expedition Alaska, and also presented CBBC‘s The Really Wild Show. Steve gave us a few stories of his adventures and congratulated us all on our achievements before handing back to the guy who told us what to do when Prince Philip entered.

Prince Philip entered the room and began to speak to the first of the four groups, we couldn’t hear what was being said until he got to the group before us, when he made a hilarious remark to some girl; he tended to ask people individually what they did for a certain section of their award (“What did you do for your service/skill?” or “Where did you go for your expedition?“) and he asked this one girl what she did for her skill, she replied “I was on the committee at my university” to which he responded “That’s a skill, is it?” which made everyone laugh – I guess it’s only really funny if you’ve done the award; you see, there’s always debate about what constitutes a skill, and some people sign things off claiming them to be a skill, which is cheating really. You’re meant to do something like learn a musical instrument or take up a new skillful hobby and show improvement over time. He’s perfectly right to have said that because she’s clearly signed it off unlawfully, and what a way to be told! There is no higher authority than Prince Philip himself! Miles & I thought it was brilliant how he came out with it! Completely BURNED!

He got closer and as he moved on to our group, the last group, and he immediately spotted me and Miles on the end; he asked us if we were from the same Scout group, and commented that he noticed we were in the same uniform with the same necker colours (the necker is a group identifier). He then noticed another lad in Scout uniform and presumed aloud that he was from another group, and started to ask other people where they did their award through, some did it through schools & colleges, one from the St. John’s Ambulance, but most of them seemed to be from Scouts. He asked a few more questions to the group, asked if anyone had done their expedition abroad, which Miles had, so he told him that he’d done it in Slovenia, and explained that they climbed Triglav which he described as “that big hill” which made everyone chuckle. Prince Philip then got hold of the pile of certificates and said “Are there enough here? They must be very thin!” to which Miles’ wit leaped out as he said “It’s that credit crunch” which was hilarious at the time, and had everyone laughing.

It was great to meet Prince Philip (or to use his full title since 1957: His Royal Highness The Prince Philip, Duke of Edinburgh & Philippos of Greece and Denmark), and at age 87, is doing great. He is the patron of the University of Cambridge, as well as the D of E Award and had a great military career which he was forced to give up on becoming consort to Queen Elizabeth II when her father George VI died (I read on wikipedia today that he was the one who broke the news to her while on holiday in Kenya in 1951). With my Queen’s Scout and D of E certificates I now have the complete set! Signatures from them both.

I couldn’t get any photos inside the palace as it wasn’t allowed, but I got some just outside, and there’s a good one of the London Eye from the bridge in St. James’ Park.