GPIO Zero is a Python library I created to make physical computing on the Raspberry Pi more accessible, particularly for use in education. Read more about it on raspberrypi.org, or about how it was created in an article on this blog, GPIO Zero: Developing a new friendly API for Physical Computing.

GPIO Zero is a module providing simple interfaces to GPIO components and devices (LED, Button, Buzzer, LightSensor, TrafficLights, etc). It provides classes representing these devices, for the user to create instances to control each of them. Each device has all the features you’d expect the component to have (e.g. LED has on/off/toggle/blink methods), providing a simple way to perform common tasks with the device. More complex devices (sensors and such) usually require humongous amounts of code, when using the previous library RPi.GPIO, but with GPIO Zero, are generally as straightforward as the simple LED:

Now the LED’s source comes directly from the Button’s values. In other words, when the button is pressed, the LED is lit.

Version 1.2 of GPIO Zero is out now! The next Raspbian release will include it, but you can upgrade now with:

(Note: apt-get install will install a package if it’s not already installed, and will upgrade it if there’s a newer version available)

This version has zero dependencies, so you shouldn’t have any issues installing it even on an older Wheezy image. Previously, the library depended on RPi.GPIO, and spidev, but these are no longer requirements. Alternative pin implementations are available (more on that later), including a pure Python one built in to the library, so RPi.GPIO is no longer required. If it’s present (more than likely the case), then it will be used, but three alternatives are sought if it’s not! Also, a software implementation of the SPI protocol has been implemented, meaning it’s possible to interface with SPI devices without using hardware SPI at all (the spidev library doesn’t need to be installed, and SPI doesn’t even need to be enabled in raspi-config).

Something I’ve wanted to have since the early days, but had no idea how to implement. Dave created a test suite, which does a decent job, but does not currently cover the full scope of the library. We have continuous integration set up with Travis, and people have even created GPIO Zero projects related to this – using the Travis CI API to show the test suite status on traffic lights. 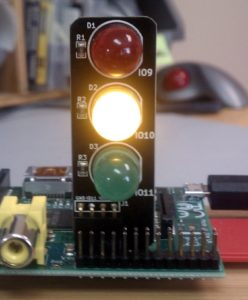 See the changelog for full details. We’ve added the following:

Energenie is a long-term favourite of mine and others, it’s an add-on board for the Pi which communicates wirelessly with a special power socket (or set of sockets). I previously maintained a Python module for controlling the Energenie, providing simple switch_on() and switch_off() functions which took a socket number to control. The GPIO Zero solution is just as simple, a little more elegant, and importantly comes bundled with the fancy features of a first-class GPIO Zero component (source/values)!

Here a connection to Energenie’s socket #1 is created, referenced as light (an actual wall socket desk lamp rather than an LED) and the button set to trigger the light to come on. That’s right – a light switch! 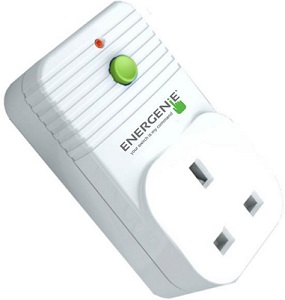 The basic line sensor unit is a simple binary sensor, so its interface is similar to the Button. It just has aliases for is_active, when_active and wait_for_active.

There’s one of these in the new CamJam Edu Kit 3 (robotics kit), so it will be handy for that!

The ultrasonic distance sensor is a little more complex in implementation, and requires two GPIO pins (echo and trigger). Its distance thresholds and such are configurable but basic usage looks like this: 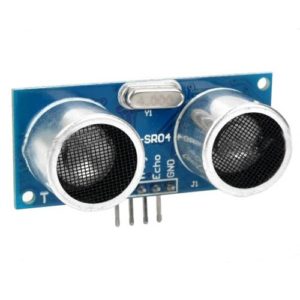 There’s also one of these in CamJam Kit 3 and they’re popular for various projects not limited to robotics.

An excellent Christmas themed add-on board made by Ryan Walmsley. It’s a snowman with LEDs for eyes, one for the nose, and three for each arm. 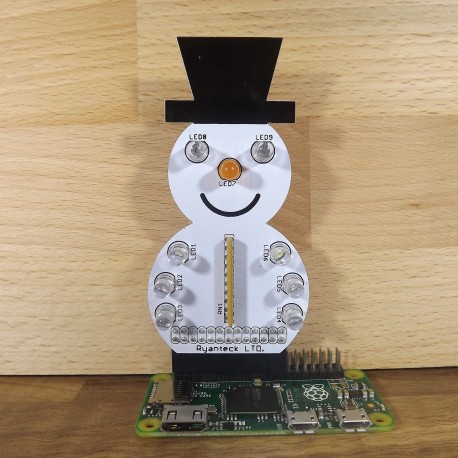 This one’s pretty fun to play with! A real stocking filler for next Christmas :)

Martin O’Hanlon suggested we add a way to detect when a button is held for a given length of time, rather than just when it was pressed. He submitted a PR adding a new HoldableButton class, but Dave ended up adding the functionality into the standard Button class:

We’ve had led.blink() from the very beginning, and we’ve had an interface for variable brightness LEDs (using PWM). Recently we added additional parameters to PWMLED‘s version of blink so you could configure fade in time and fade out time:

Andrew Scheller then added a PR for a pulse() method which defaulted on_time and off_time to 0. We liked the idea but it seemed rather pointless to create a new method merely aliasing some different default settings of an existing method. I ended up suggesting we actually remove the in_time and out_time parameters, so it’s more like regular blink() but with automatic fading, and the time of the fade configurable. So now:

Named parameters are not necessary, so in this example you can just use led.pulse(1, 1) – or skip them altogether as those are the defaults:

We added to our initial support of a couple of ADC chips such as the MCP3008:

As I mentioned earlier, there’s now a software implementation of the SPI protocol which means you don’t need spidev installed or SPI enabled in raspi-config.

There’s now a function you can run that returns a whole bunch of information about the Pi you’re using: the revision, model, SoC, manufacturer, memory, storage type and more. As well as providing this information to the user on request, it is used internally to warn users when they, for example, try to use a pull-down circuit on a pin with a physical pull-up resistor built in. Also, developers could use this information to do similar things in their own projects or libraries. See the wealth of information provided in data.py

The source/value feature is more advanced than simply using loops, or even callbacks, but it can be really powerful. We found that although the basic examples were very simple to use, there were many alternative common uses that required much more code. For example, if you wanted one LED to mimic another, that’s just blue.source = red.values, but if you want one to be the inverse of the other (i.e. red at 40% brightness should make blue 60% brightness), you’d have to create your own generator function:

But now we have a set of tools exactly for these common use cases. We have absoluted, clamped, inverted, negated, post_delayed, pre-delayed, quantized, queued, scaled, cos, sin, random_values, all_values, any_values and averaged. The invert example becomes:

See the documentation on source tools for more information and examples.

Initially, when I created GPIO Zero, it was just an abstraction layer sitting on top of an existing GPIO library, RPi.GPIO. However, we now support four multiple back-ends: RPi.GPIO, RPIO, pigpiod and a native implementation. The priority is such that RPi.GPIO is preferred, being the most stable option we know of (and 99% of users will be using this implementation, as it’s pre-installed in Raspbian); secondly, RPIO, another Python library with better PWM support; thirdly a Python module which communicates with a C library (pigpio) running as a daemon (pigpiod), which is an interesting option I’ll explain next; finally, if none of those libraries are found to be available, the fallback is a pure Python pins implementation Dave wrote as part of GPIO Zero. It’s pretty basic at present, and is rather experimental, but for basic use it does just about work.

pigpio is a C library which provides an interface to GPIO, PWM, SPI, I2C, Serial and more. Its feature set is brilliantly extensive, and its killer feature is the daemon. pigpiod runs as root, but takes commands via sockets from the regular Pi user, or anywhere else. It’s also got a comprehensive set of documentation. Unfortunately, despite its excellent quality and usefulness, it’s not packaged or distributed. It’s just sitting on GitHub. However, we (the Foundation) intend to do this packaging work and ship it with Raspbian in future. Watch this space. Or that space, maybe.

One amazing feature of pigpio is remote pin access. Because GPIO Zero has no dependencies, I can install and run it on my Ubuntu laptop (it would also run on Mac or Windows). I can open a shell, and type:

So rather than creating an LED on pin 2, I create it on a reference to a remote pin elsewhere on the network. This is seriously cool and I look forward to this being used more broadly once pigpio is packaged. See the pins docs for more information on the various pin implementations.

We created a GPIO Zero cheat sheet for a special edition of The MagPi. You can download the poster for free from raspberrypi.org/education/downloads/ 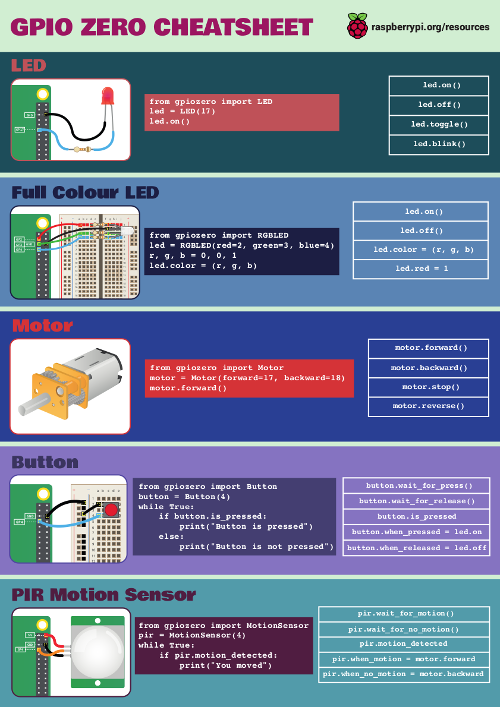 Development of v1.3 is under way. We’re planning to add:

See the v1.3 milestone for more information – and feel free to chip in with ideas, suggestions and code!

Daniel Pope created PyGame Zero, a zero-boilerplate module for making games with Python. I followed this philosophy with GPIO Zero (aptly named so, just before Pi Zero came out…)

The MicroPython API for the BBC micro:bit has been designed with a similar philosophy, and there’s now a NetworkZero library made by Tim Golden. You can read about it in his blog post. Nicholas Tollervey has created a Py-ZeroZero organisation on GitHub for discussion of this family of *Zero libraries and a description of our philosophies.

Dave Jones has gone above and beyond and he’s responsible for the vast majority of the code base (and the feature set). I can’t thank him enough for the voluntary work he’s done on the library. 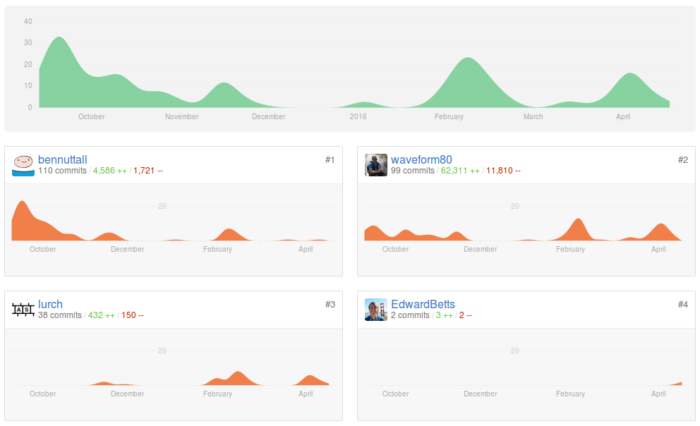 Thanks also to Andrew Scheller, who’s made some great contributions to the code, and helped a lot by posting issues and commenting on commits and PRs. And to Martin O’Hanlon who helped create the holdable Button; to Schelto van Doorn, who added numerous ADC chips; and to everyone who’s used the library, given feedback, shared it with others or provided help with documentation, API design or usage suggestions. Finally thanks to Joan for pigpio.