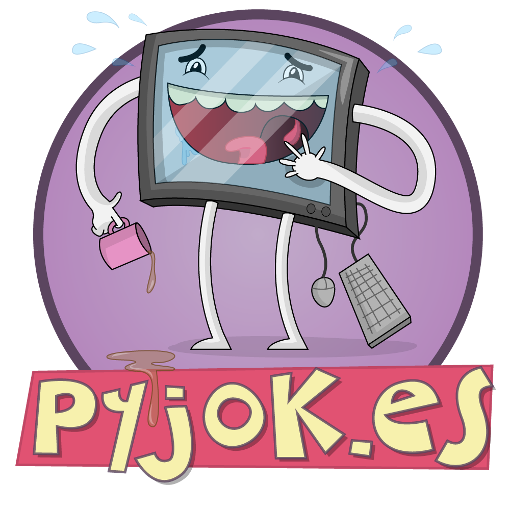 Last year I was invited to speak at PySS in San Sebastian, Spain, and I met a great bunch of guys: the conference organisers Alex, Oier and Borja. We started a project called pyjokes (one line programmer jokes; jokes-as-a-service)

I gave a 5 minute lightning talk at PyConUK last weekend telling how pyjokes came about: 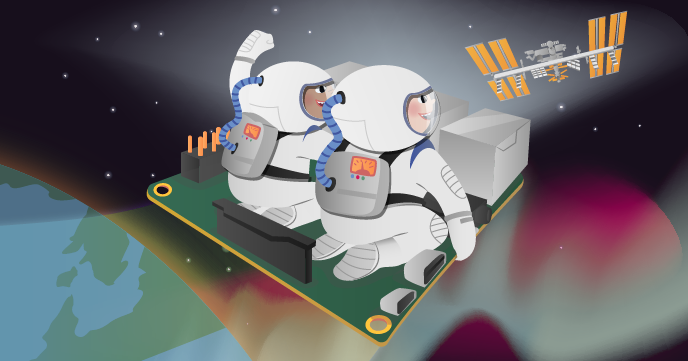 I now have a monthly column on opensource.com – a brilliant website for all things open source. I’ll be writing articles about Raspberry Pi – particularly its use in education.

My first piece was published last week, covering the Astro Pi competition – we’re sending two Raspberry Pis to the International Space Station! Read the full piece: Students compete for a chance to have their Raspberry Pi code run in space.

This piece was featured in the website’s weekly top 5:

Keep up with my monthly column at opensource.com/users/bennuttall 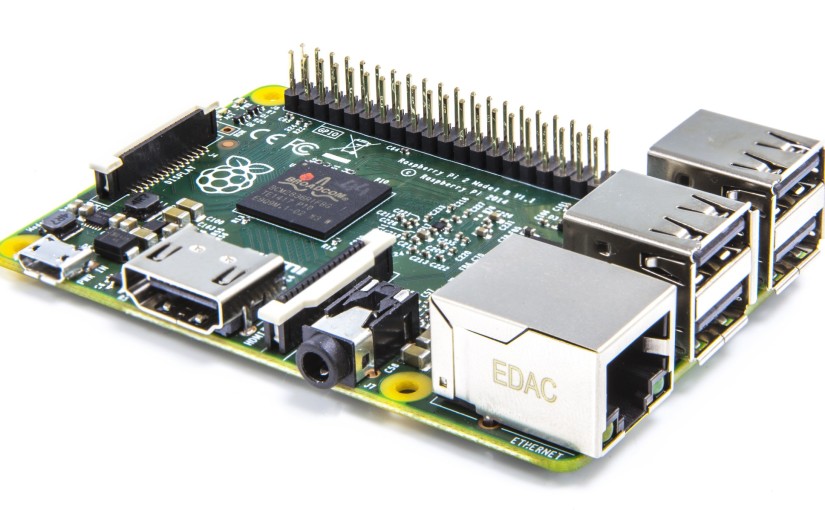 I’ve been working at Raspberry Pi for over a year now and this is the fourth product launch I’ve been involved with: first there was the compute module for industrial customers (announced in April, on sale in June); then the Model B+, a redesign of the original Raspberry Pi with a neater form factor and some welcome enhancements;  and finally the Model A+, the lower spec edition of the ‘plus’ range.

and it’s available for the same price as the previous models, just $35 or about £25. As it’s now ARMv7 this now opens up the opportunity for it to run a number of additional operating systems – it’ll run Ubuntu (a Snappy Core image has been provided by Canonical, and it’s feasible for a lightweight version of the desktop to run too), and there are even plans for it to run a Windows 10 IoT (Internet of Things) platform later in the year due to some work from Microsoft – who are providing it for free.

It seems amazing to me now that when I look back to 29th February 2012, when I got up at 6am to try to order a Raspberry Pi on its launch day, hitting F5 on the websites of distributors element14 and RS Components trying to get a page I could place an order, that in 2015 I was the one responsible for the Raspberry Pi website for the launch of Raspberry Pi 2! 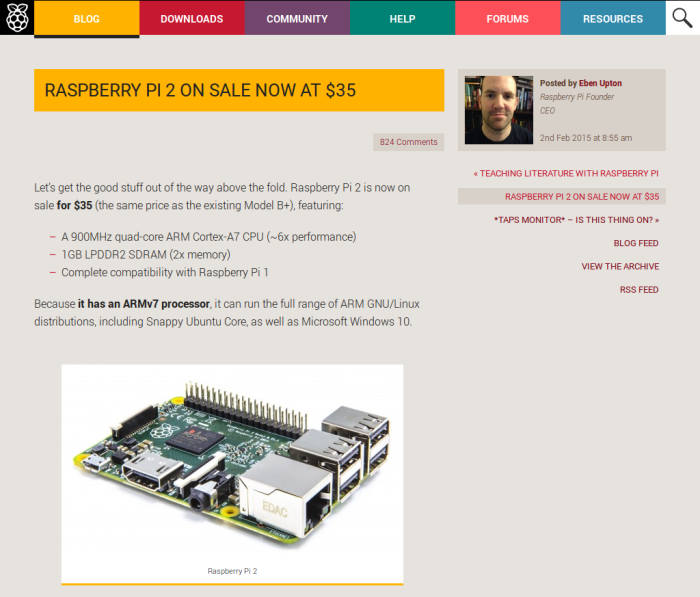 Prior to the launch I had a conversation with Pete from our web hosts Mythic Beasts, and I suggested we put the contents of the announcement blog post on the server’s failover page (rather than “Down for maintenance”). It turns out that was a brilliant idea as it’s what we ended up serving for most of the day! Unfortunately as I’d stripped the page down to a bare minimum static page with no dependencies on JS libraries, stylesheets or images, I’d also removed the Google Analytics tracking code, which meant we lost track of millions of hits (I was excited to share we’d had 1.3 million hits compared to the 0.3 million the previous day, but Pete said we’d had 11 million). Not that the numbers are crucial but it would have been nice to have the spike in the history.

See this blog post from Pete on coping with the launch, lessons learned and what he intends to do to our server to cope with future launches. 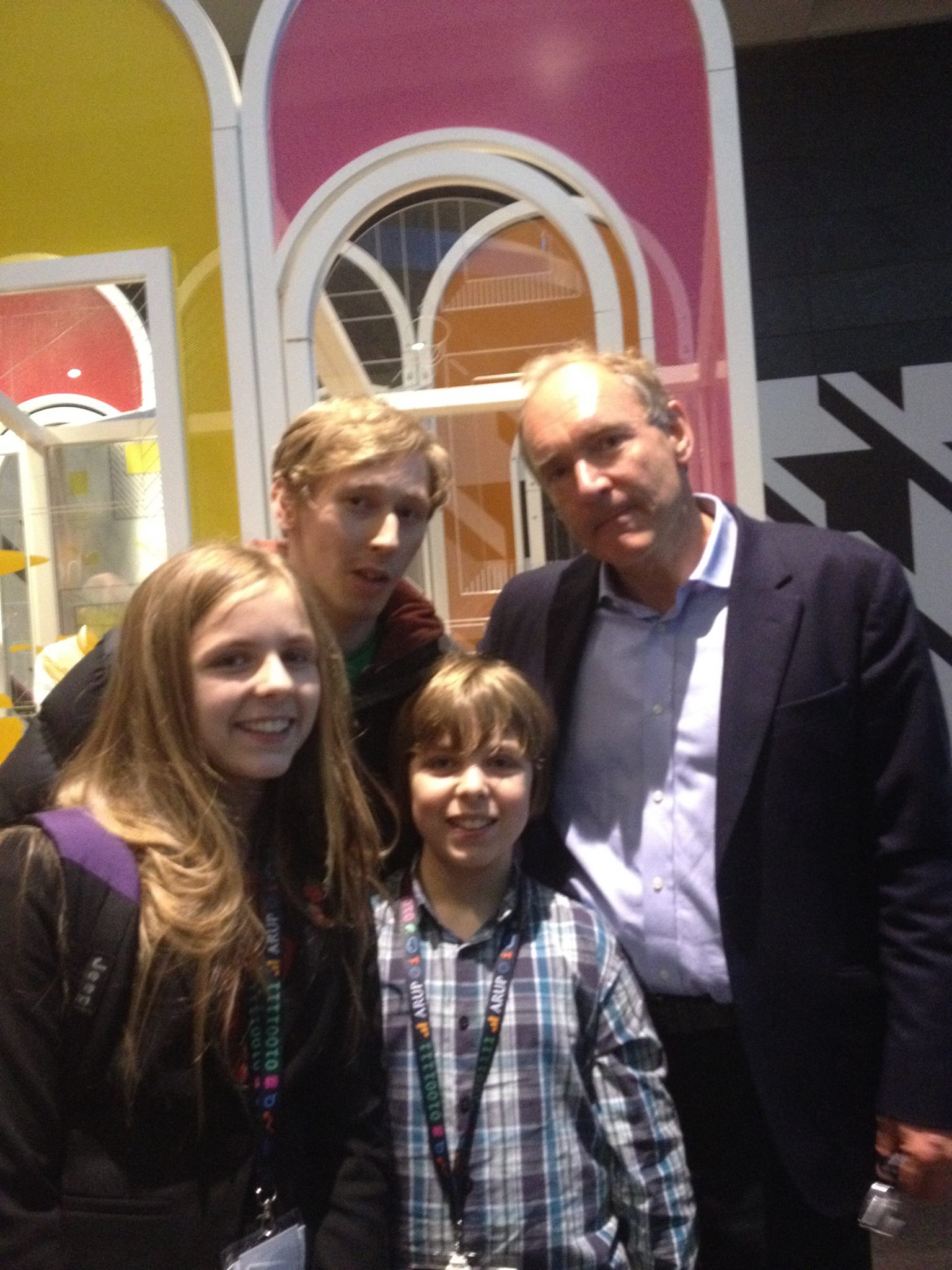 Last December I started my job at the Raspberry Pi Foundation and this time last year, having just completed my first month, I wrote my review of 2013 and all the events which led up to that move.

Here is a round-up of all that’s happened since then.

See my full list of talks with links to videos and slides on my talks page.

I also got to meet creator of the world wide web Tim Berners-Lee at the Open Data Institute Summit where I was supporting Amy Mather who was speaking at the event.

I gave a few interviews for magazines and websites:

I was asked to go on a tour of America to do some outreach work for Raspberry Pi – and I said I’d be travelling from New York to Salt Lake City. I planned a route based around requests for visits and ended up covering 4200 miles in a hire car, giving 17 talks in schools, universities and hackspaces. I had a brilliant experience, met some great people and spread the word about what the Foundation is doing.

The places I visited:

You can read a full account of my trip on the Raspberry Pi blog: Ben’s Mega USA Tour

In the first few months of the year I worked hard on building a new website for the Raspberry Pi Foundation, extending the existing blog in to a full website with various sections and numerous components. This was launched in April and received praise from the community. It has evolved somewhat since its initial release and took on some new design tweaks recently with complementary illustrative graphics from Sam Alder.

I’ve continued to run Pi Weekly, putting out a newsletter each week with help from Ryan Walmsley, who recently stepped down to concentrate on his university studies.

Now at its 81st issue, not having missed a single week since launching in June 2013, it’s going strong with a subscription base of over 11,000, up almost double in a year.

I wrote a number of learning resources as part of my role at Raspberry Pi. Some notable ones being:

I’ve been working on other projects such as the upcoming Chef HAT (sous vide cooking with Raspberry Pi and Energenie) with Rachel Rayns, which will lead to a set of new resources and maybe even a bank of open source cooking recipes!

I’ve also been running workshops and giving presentations at Picademy – the free teacher training course we started running this year, introducing teachers to using the Raspberry Pi in the classroom and giving them the confidence to successfully deliver the new computing curriculum.

As well as numerous contributions to existing open source projects, I’ve released my first two Python modules which can be found on PyPi and installed with pip:

I’m currently working on packaging energenie for Debian, and have some other packaging work to do once I’ve got the hang of it.

I’ve also made a name for myself in my advocacy of GitHub – teaching people how to use it or get more from it, and introducing teachers to using it in it education.

And here’s what my year of public GitHub contributions looks like:

I’ll be doing more of the same in my role at Raspberry Pi, hopefully producing some more projects and writing more resources.

I’ve just bought myself a nice new camera so I’ll be learning how to use it and posting photos to Flickr at flickr.com/photos/ben_nuttall