Last December I started my job at the Raspberry Pi Foundation and this time last year, having just completed my first month, I wrote my review of 2013 and all the events which led up to that move.

Here is a round-up of all that’s happened since then. 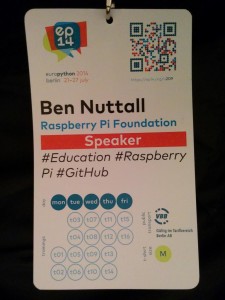 My favourite conference badge of the year

See my full list of talks with links to videos and slides on my talks page. 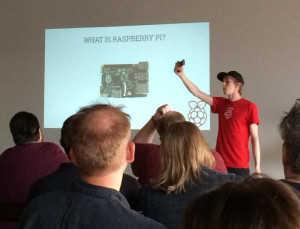 Speaking at a hackspace in America

I also got to meet creator of the world wide web Tim Berners-Lee at the Open Data Institute Summit where I was supporting Amy Mather who was speaking at the event. 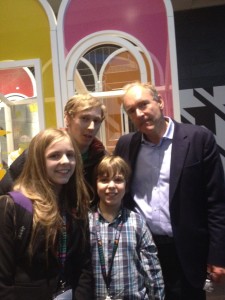 I gave a few interviews for magazines and websites: 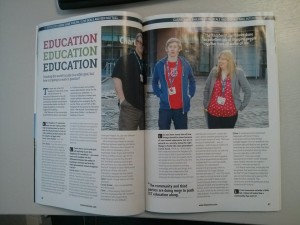 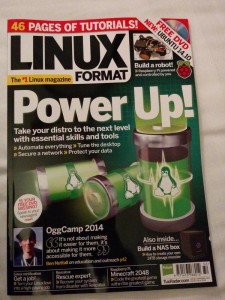 Me on the front of Linux Format magazine

I was asked to go on a tour of America to do some outreach work for Raspberry Pi – and I said I’d be travelling from New York to Salt Lake City. I planned a route based around requests for visits and ended up covering 4200 miles in a hire car, giving 17 talks in schools, universities and hackspaces. I had a brilliant experience, met some great people and spread the word about what the Foundation is doing.

The places I visited:

You can read a full account of my trip on the Raspberry Pi blog: Ben’s Mega USA Tour

In the first few months of the year I worked hard on building a new website for the Raspberry Pi Foundation, extending the existing blog in to a full website with various sections and numerous components. This was launched in April and received praise from the community. It has evolved somewhat since its initial release and took on some new design tweaks recently with complementary illustrative graphics from Sam Alder. 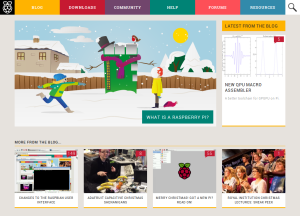 I’ve continued to run Pi Weekly, putting out a newsletter each week with help from Ryan Walmsley, who recently stepped down to concentrate on his university studies.

Now at its 81st issue, not having missed a single week since launching in June 2013, it’s going strong with a subscription base of over 11,000, up almost double in a year.

I wrote a number of learning resources as part of my role at Raspberry Pi. Some notable ones being:

I’ve been working on other projects such as the upcoming Chef HAT (sous vide cooking with Raspberry Pi and Energenie) with Rachel Rayns, which will lead to a set of new resources and maybe even a bank of open source cooking recipes!

I’ve also been running workshops and giving presentations at Picademy – the free teacher training course we started running this year, introducing teachers to using the Raspberry Pi in the classroom and giving them the confidence to successfully deliver the new computing curriculum.

As well as numerous contributions to existing open source projects, I’ve released my first two Python modules which can be found on PyPi and installed with pip:

I’m currently working on packaging energenie for Debian, and have some other packaging work to do once I’ve got the hang of it.

I’ve also made a name for myself in my advocacy of GitHub – teaching people how to use it or get more from it, and introducing teachers to using it in it education.

And here’s what my year of public GitHub contributions looks like:

I’ll be doing more of the same in my role at Raspberry Pi, hopefully producing some more projects and writing more resources.

I’ve just bought myself a nice new camera so I’ll be learning how to use it and posting photos to Flickr at flickr.com/photos/ben_nuttall