While I was in Manchester, I shared an office with two guys, Sam and Scott, who ran an animation studio called Saladhouse. Me being me, I used to talk about Raspberry Pi all the time – and my enthusiasm rubbed off on them both. Scott ordered a Pi kit from Pimoroni and once used it to display some interesting visuals (Amy Mather’s pygame implementation of Conway’s Game of Life) as the backdrop of a stage at a gig he was involved with putting on, and Sam said it would be nice to make an animation explaining what Raspberry Pi is.

We bounced some ideas around, and discussed what it would be like. We seemed to think alike and have similar ideas on how it would be – and liked each other’s input. I wrote the script, and Sam storyboarded it. At around this stage, I had just been invited to visit the Raspberry Pi Foundation – so I put Sam in touch with Liz Upton and she liked the script and the initial storyboard and they discussed our ideas. We’d intended to do this as a hobby project, but Liz was very keen to make this happen so it was commissioned by the Foundation, and we went in to production. Sam and Scott came along to Manchester Raspberry Jam in November, which Liz and Eben also attended, and I introduced them. Liz apologised for taking me away from them, and Scott replied “Oh, it’s ok”. I suggested we asked Amy Mather to do the voiceover, Sam liked the idea too (and Liz loved it), so I introduced Amy to Sam and they arranged the sound recording session. Amy gave some suggestions which influenced the final piece – such as changing the ’80s bedroom poster from Back to the Future to Hack to the Future.

I then moved to Cambridge to work at the Foundation and was regularly updated with how it was coming along, and got to see pictures like this: 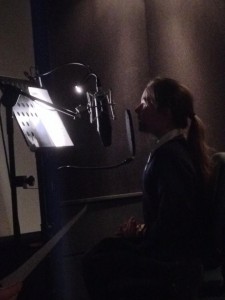 The guys worked hard on the animation through December and January and we released it this week!

Huge thanks to Sam and Scott at Saladhouse, to Marcus Alexander for the sound design and to Amy Mather for doing the voiceover. I’m really proud of how it turned out and we’ll be using it to promote Raspberry Pi everywhere we go!