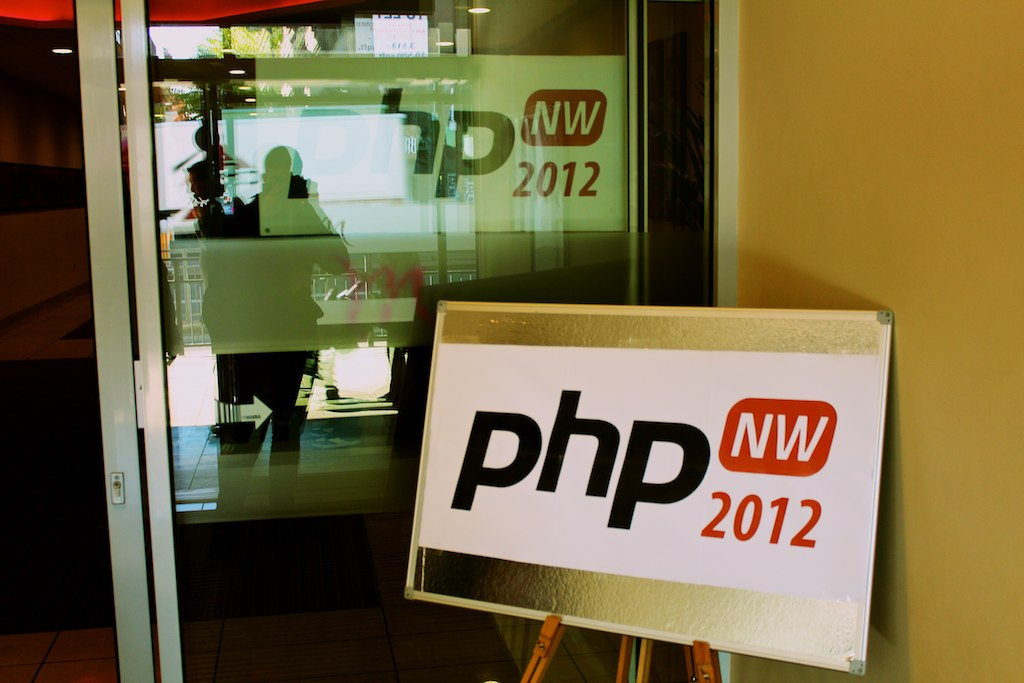 This weekend I attended the fifth (my third) PHPNW annual conference. As a member of the local PHPNW user group and community, I volunteer as a helper which involves getting delegates registered, getting the speakers to the right place and making sure everything’s running smoothly. Starting on the Friday evening hackathon social, I got chatting with a few faces old and new and once I’d eaten, got coding with Mike – we did the Ordered Jobs Kata in PHP – pairing and using PHPUnit. We continued with this, along with getting in conversations with other delegates, until around midnight – then Mike gave me a kickstarter demo on Phing – the PHP Deploy tool – which I’ve used before, but never written build scripts for, so that was a really useful session – well in to the morning!

Arriving at the conference centre bright and early, donning our new PHPNW12 red helper t-shirts we got people registered and handed name badges out. Once we had everyone settled in, the event kicked off with a truly inspiring talk from Google’s Ade Oshineye on relating API design to real world usability (like doors that are hard to work out how to open). I then shadowed Patrick_Allaert for his talk on PHP Data Structures – I learned an awful lot about the different data structures available in SPL – I had no idea they were even there. Picked up some other useful tricks and tips too.

I chatted with Ben Waine over lunch and headed over to Michael Heap‘s talk on designing systems to scale, though the room was full so I ended up hanging out in the “corridor track” with the Magma crew. In the next session I opted for the unconference track for Ben’s talk on ‘Testing Your Shit with Behat’ – cool to see Behat in action! Next up I was shadowing for Google employee Ian Barber, who gave last year’s keynote (before he worked for Google) entitled ‘How to Stand on the Shoulders of Giants‘, which is well worth a watch. This year’s on ‘How to Build a Firehose’. A really interesting talk on how to deal with exposing live data streams in real time.

Following the usual wrap-up of the day, the social happened.

Somehow I managed to get up in the morning and head back to the conference centre. The first talk was on Responsive Design at the BBC – a fantastic and intriguing talk from John Cleveley. The second talk slot had two talks I really wanted to see – Adrian‘s talk on using nginx on the Raspberry Pi, and ‘To SQL or To No(t)SQL‘ by Joroen Van Dijk – but I was down to shadow the other track, Recognising Smelly Code, which I really enjoyed – had some really good points and the speaker shared my adoration of good naming conventions and the single responsibility principle.

Another great conference – it gets better every year, without ever having been bad. Thanks to Magma for organising, and to all the sponsors and delegates for making it an awesome event. It really reminded me how great the PHP community is.

I will close with a statement expressing my opinion of Drupal: