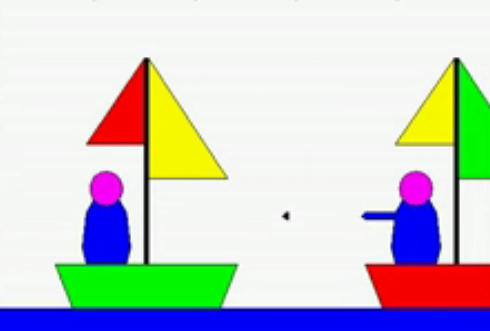 I’ve had a hectic week this week trying to get all my assignments in. I had a MATLAB assignment due in on Thursday and a Java one due in today.

The MATLAB one involved two questions: the first was a banking system which calculated interest and mortgage payments; the second was an animation of a sporting event. The first question involved a switch statement to begin, so the user was prompted to choose one of four options, each one taking them to a certain part of the code and allowing them to perform their chosen banking task. Within each of those I had to use nested for loops and if statements, taking input values and getting the loops to work out how to calculate the answer based on their inputs (for instance if the user entered 10 years, the loop would have to run 10 times), which was kind of fiddly but fairly easy. If you don’t know what a for loop is, it’s quite common in many programming languages, and here’s a brief explanation:

For the animation, I had to draw the figures using x- and y-coordinates of polygons, filling them in with a chosen colour, and then use a for loop to change their coordinates (i.e. move all the x-coordinates one space to the left every time the loop runs). It started off as a simple yacht animation, but I got carried away when I added the second yacht and made it into a pirate chase with a bullet being fired.

It actually sailed smoother before I added the movement up-and-down, but the code to make it do this was rather complex and imaginative so I left it in to get more marks. I nested an if statement within the for loop:

So every time the loop ran (the ellipsis doesn’t show the bits of code that get the x-coordinates to move the the left), the if statement checks to see whether j is divisible by 2: if it is, the y-coordinates increment by 1; if not, they decrement. This makes the boat (and all its related shapes, again not shown) move up and down alternately. The assignment handout included a video of an animation worth 90% and it was much simpler than mine so I should have scored fairly well.

Once I had this finished and submitted I had to get on with my Java assignment: to make a simple sketching program in Java, as an applet for HTML. About 24 hours before the deadline I hadn’t done much, only the very basics, and then spent most of the afternoon helping 3 other people to get that far, went to have a beak for about an hour and a half and went to train, then did a little more before going out to see the Inbetweeners at a club in Manchester, then woke at 10:00 the next morning to carry on with it, just 2 hours before the de this was only enough to get 40%. I worked on it every second for the next two hours, trying bits of code to get it to do more advanced functions, I added colours, a reset button, a change background colour function, different shapes, a text field, another text field, a change size field, and so on, until I had completed the list of functions to include, which were given with percentages of how much you would get if you did them, up to 70% (a First Class), and it said extra marks would be awarded for extra features and for the general ‘look and feel’ of the applet, so I should have done pretty well. I submitted at 11:59. Just in time.

Java and MATLAB seem to be very similar in what you can do and the code you use to do it, but MATLAB’s syntax is much simpler. Next year’s Java will be much more complex, with a much stronger emphasis on objects. As for MATLAB, I specifically chose the units which included MATLAB programming, one of which was about computer graphics and virtual environments, and most people who aren’t interested in programming will have gone elsewhere so it should get much more hardcore.