Mathworks Sent Me a Rubik’s Cube

So I’m sitting in my office, bashing away at my keyboard, when a small parcel arrives on my desk. I wasn’t expecting anything, I’m new here so it wouldn’t be work-related, it wasn’t just a letter but a small parcel containing an object quite clearly in the third dimension. Who on Earth would be sending me 3D objects in the post to my work!?

I looked at the address label to verify it was definitely for me. It was.

Then I noticed the Mathworks logo stamped in the corner. I have no dealings with Mathworks, other than using their software Matlab while I was a student. Most people who know me know I’m a huge fan of Matlab. But I don’t think they know that. Surely they have no reason to write to me, never mind send me 3D objects in the post.

I opened up the parcel to find a Mathworks-branded Rubik’s Cube. I’d seen one of these before – the week before on Twitter @MATLAB posted a picture of one of these:

And so I looked inside the parcel to see if there was anything else. There was a letter: 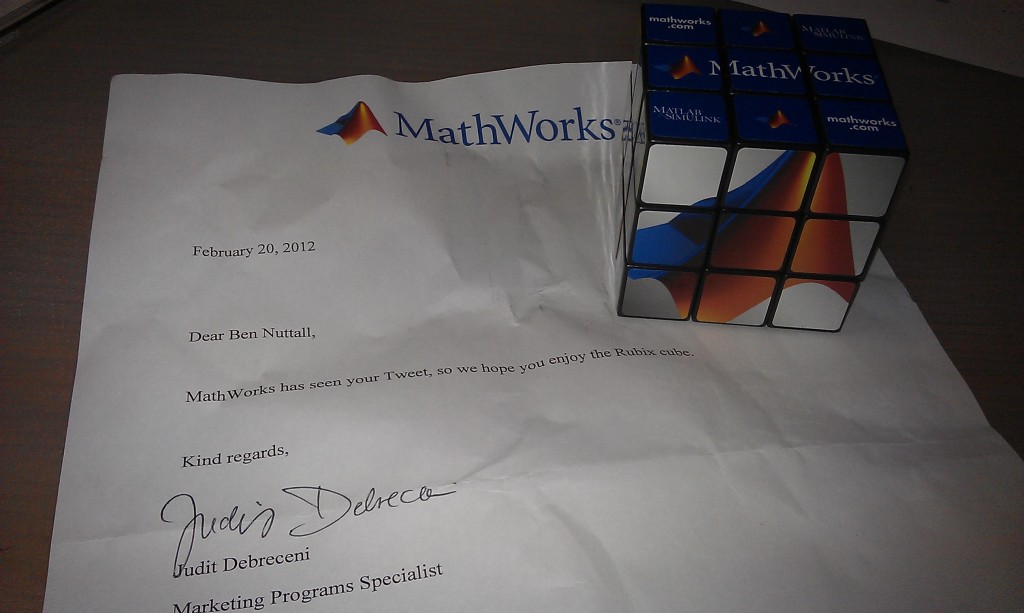 Mathworks has seen your Tweet, so we hope you enjoy the Rubix Cube

Brilliant! (Apart from the misspelling of Rubik’s Cube…)

I genuinely don’t believe this just happened. @MATLAB just sent me a Rubik’s Cube in the post to my work :D #thankyou twitter.com/Ben_Nuttall/st…

I think it’s great. It’s an interesting puzzle (another addition to my collection of cubes) as each side contains a different picture made up of the 3×3 grid on each side, rather than just matching colours. Also I noticed that once I solved it the first time, the centre pieces were the wrong way round. This is something I’ve never considered before because on a normal cube, you just have to get the pieces on the right side. You would know if a corner or edge piece was wrong because then the colours wouldn’t be the same on each side, but the centres – I always assumed they didn’t rotate relative to the corner and edge pieces! But I’d never noticed because there’s no orientation to the centres on normal cubes.

I had a play and couldn’t figure out a fool-proof method of solving the centres, so I put it down, carried on coding (in PHP, not Matlab) and left it for me to figure out on the train. I managed to do it on the train back to work the next morning, but then messed it up again trying to explain to Mike how I’d done it! I played with it some more that weekend, and became a bit more aware of how the middle-centres moved when you did the final step using my solving method (switching the 4 centres on the top layer around), and can usually solve it using a technique I developed, but it’s far from perfect and seems a bit of a hacky solution. Maybe with more inspection I’ll figure out a general solution for the centres.

Anyway – huge thanks to Mathworks for the prezzie – I love it! Also I appreciate the human touch applied here.

I think I deserve it, anyway – the amount of PR I’ve done for them by telling everyone how awesome Matlab is for the last 3 years or so!