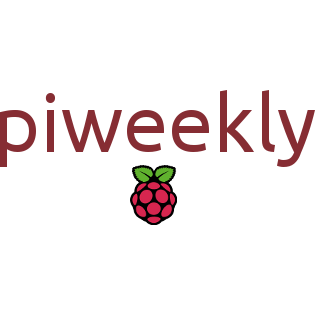 Two weeks ago I had an idea – to launch a weekly Raspberry Pi email newsletter. I had a think about how it would work and what it would entail. I subscribe to a handful of similar ones for programming topics, notably a Python one called PyCoders Weekly, which is a simple link aggregator with short descriptions, for news and projects.

I pinged Ryan, a person I’ve never met but know through the Pi community on Twitter, to see if he liked the idea, and if he wanted to get in on it. He ponged in agreement and was on board. We discussed ideas for names and decided on Pi Weekly – the next day I registered the domain piweekly.net and registered the Twitter account @pi_weekly (unfortunately @piweekly is taken by Personal Injury Weekly). Then I set up a WordPress site and a mailchimp account, wrote a quick clean theme for the site, added some information and stuck the signup box on the homepage. Ryan and I had a look around for some links to put in the newsletter, shared ideas about how we should lay it out and we decided we were ready to launch that week.

I told a handful of friends about it, and we had 13 people signed up by the time we announced it on Twitter. Word spread quickly and we were tweeted about by Liz Upton on the Raspberry Pi Foundation Twitter account:

Big thanks to @ben_nuttall and @ryanteck for all their work on @pi_weekly – superb idea! We’ve added it to our weekly reading list.

An hour and a half after the noon launch, we had 100 subscribers. By the end of the weekend we’d passed 300.

All past issues will be readable on the archive page Check out Issue #1. If you have any suggestions for links for us to include, you can tweet them to @pi_weekly or email submissions@piweekly.net – sign up at piweekly.net

EDIT: In August 2013, Pi Weekly was featured on the Raspberry Pi website and we were praised and highly recommended by Liz Upton. Read the post – Pi Weekly: a free email newsletter